For the primary in vivo assay of PRiSM, we have chosen to implement in utero electroporation (IUE), which allows us to quickly assess if a variant has a deleterious effect on in vivo neural progenitor cell (NPC) function, such that it interferes with neural migration to the cortical layers. 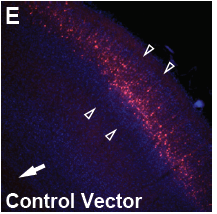 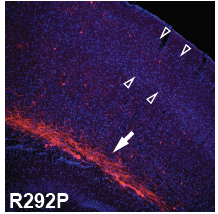 The development of the highly organized six-layered cerebral cortex requires an intricate interplay between cells. Hence, small perturbations in neural progenitor cell function can readily result in an impairment of cortical migration. Among the most advantageous features of the IUE-based migration assay for the screening of de novo mutations is the high sensitivity for observing alterations in the function of the subpopulation of mutated cells embedded within an otherwise normally developing brain. Hence, competition between the mutated and wild-type cells is likely to exacerbate the functional consequence of the cells carrying the mutation.

For the IUE assay, plasmids (containing mutant gene variant, reference gene, gene knock-out/knock-down targeting vectors, and control vector) are injected into the lateral ventricle of developing mouse embryos, and upon electroporation targeted to neural progenitor cells residing in the ventricular zone around the lateral ventricle. The IUE is performed at E14.5 at which the cortical layers are formed by proliferation and subsequent migration of cells from the ventricular zone to the respective cortical layers (layer II/III at E14.5). Since we engineered a dual promoter expression vector that includes the fluorescent Tomato reporter gene under a separate promoter than the gene of interest, the ability of the targeted cells to migrate is assessed using fluorescence confocal microscopy and quantified by in-house developed algorithms.