Numerous mutations have been found in genes of the mTOR and RAS signaling pathway, leading to cognitive impairment, epilepsy and autism. We use in utero electroporation in combination with EEG recordings and specific biochemical assays to assess the pathogenicity of these variants. 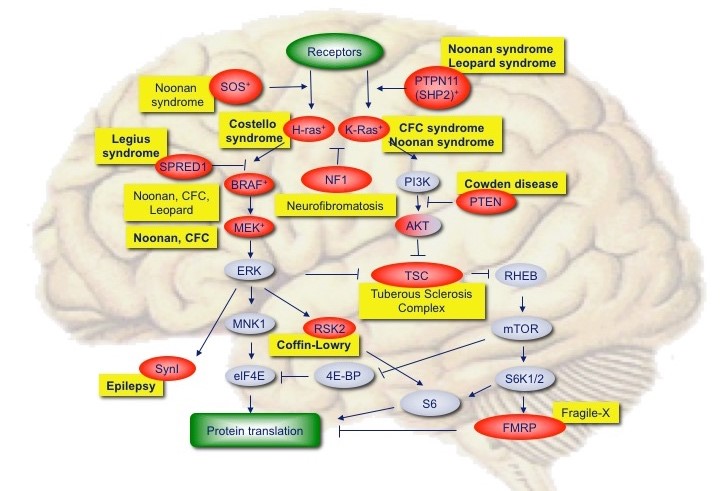 The proteasome plays an important role in synaptic plasticity and neuronal function. We have developed in vivo and in vitro assays to assess the function of E3 ligases. In particular for UBE3A we have developed a number of assays that allow us to call the pathogenicity of all missense variants identified to date. We are very interested in testing other E3 ligases, and in testing mutations in subunits of the proteasome. 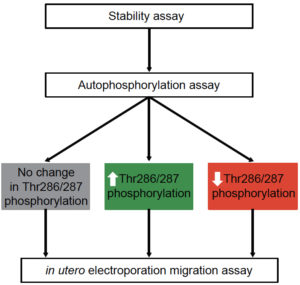 Calcium-calmodulin dependent protein kinase type II (CAMK2) is among the most extensively studied proteins in the brain, shown to be critically important for synaptic plasticity, learning and memory formation. Impaired CAMK2 signaling has been implicated in multiple neurological disorders, including Angelman Syndrome, Fragile X and Alzheimer’s disease. In collaboration with other labs using whole-exome sequencing in children with neurodevelopmental disorders, our lab recently identified a multitude of de novo missense mutations in CAMK2, indicating that mutations in the CAMK2 genes themselves can cause neurodevelopmental disorders. However, how the identified missense mutations cause dysfunction of CAMK2, its down-stream signaling pathways and ultimately neurodevelopment is largely unknown, since most of our knowledge of CAMK2 neurobiology has focused on the function of CAMK2 in the adult brain.

Making use of PRiSM we aim to create a platform for functional genomics studies to assess the pathogenicity of mutations in CAMK2 and its down-stream effectors in individuals with a neurodevelopmental disorder. Since our lab has extensive knowledge on the CAMK2 genes we have setup additional functional assays such as an in vivo CAMK2 kinase assay to look at phosphotransferase activity of the kinase towards itself as well as towards its substrates. Using these assays we have recently shown that missense mutations found in individuals with intellectual disability cause either increased or decreased phosphotransferase activity and that these mutations disrupt neuronal functioning (Küry, van Woerden, Besnard et al., 2017, AJHG). For more information see also:

Publications in which PRiSM was used